The Faraglioni of Capri are very famous all over the world, but what do we know about these natural monuments? In this article we reveal curiosity and legends 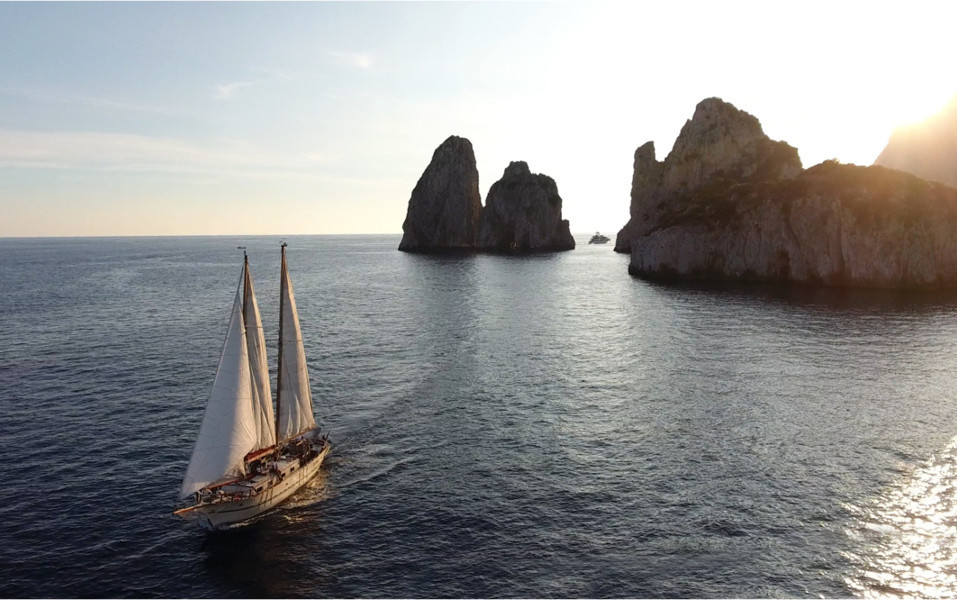 Icons symbol of the Blue Island, the Faraglioni of Capri are among the most famous natural beauties of Italy and among the most appreciated in the world. Merit of such popularity is also due to the many fashion houses that have chosen the scenario of the Faraglioni for their advertising campaigns. In short, their charm is indisputable, but beyond beauty there is more.

1. Why are they called Faraglioni?

The name derives from the Greek word «pharos» which in Italian means lighthouse. In ancient times, in fact, it was used to light fires on the mountains and on the rocks near the coast to signal their presence to the ships. Faraglioni are not an exclusive feature of Capri, but are present throughout the Mediterranean. There are also similar to the Aeolian Islands, Sicily, Pantelleria, Giglio and Puglia. However, those of Capri have conquered poets and writers of all time who, citing them in their works, have conferred on him a boundless celebrity.

2. Do you know the names of the Faraglioni?

Not everyone knows that the 3 Faraglioni of Capri has its own name linked to legends or popular customs. The first, the one still linked to the earth, on which remains of a Roman villa have been found is Saetta, the highest among the Faraglioni with its 109 meters. The second, featuring a 60-meter natural tunnel, a favorite place for visitors from around the world to take selfies or even make romantic wedding proposals, is Stella. The name derives from the cult of the Madonna della Libera, also known as Stella del Mare or “Stella Maris” to which a fourteenth-century chapel was dedicated to Mount Castiglione. Finally, the outermost one is Scopolo, which means “promontory on the sea” that reaches a height of 104 meters. This last stack is the home of a rare specimen of blue lizard.

To say it all and staying perfectly on the subject, the faraglioni would not be 3, but 4. The Faraglione Monacone , so named for the presence of the monk seal until the early twentieth century, looks back on the others. He is there, alone. Its small size often cost him the simple name of rock, but it is not so, he is a stack and finally there is someone who says it for him!

3. The Faraglioni of Capri between myth and legend

For Omero the Faraglioni were boulders thrown by Cyclops Polyphemus in anger to draw the attention of his father Neptune, god of the sea. The Mantuan poet Virgil, instead, describes them as the meeting place of the sirens, from which they could give off their sweet song, enchanting the crews of the nearby ships. Who knows that Virgil was not right. Who has been near the faraglioni knows that the place has a magical and bewitching atmosphere just like the song of the sirens.

4. Visit the Faraglioni of Capri

When you arrive in Capri one of the favorite itineraries for all visitors is the one that from the Piazzetta di Capri leads to the panoramic points where you can admire the Faraglioni in all their majesty. From the Gardens of Augustus to Marina Piccola and up to Monte Solaro, the highest point of the Blue Island with its 589 meters of height, are the strategic points where you can take perfect photos with the stacks in the background to share on social networks.

If, on the other hand, you want to see the stacks up close, the boat is the only way to do it. Renting a boat or choosing a boat tour in Capri you can also experience the thrill of crossing the natural tunnel of the Stella faraglione, made famous by a spot of Dolce & Gabbana and take a dip in the sea of ??Capri from deep blue color as in few parts of the world exists.

5. Is it possible to climb the Faraglioni?

If you are thinking of trying the climbing adventure on Capri’s stacks, then there are some things you need to know. This honor has been reserved for some sailors and fishermen of Capri, at the moment, the only ones who managed to climb the faraglioni up to the top with their bare hands. To them we owe the discovery of the magnificent blue lizard that lives on the top of Scopolo rock stack. Its scientific name is “Podarcis sicula coerulea”, but not all lizards of this species are blue. This lizard is special because the blue color has taken it to camouflage itself with the sky and the sea. You did not even know this, did you?