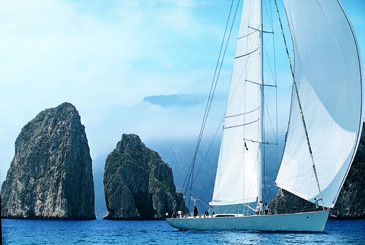 A little over a month before the races of the Rolex Capri Sailing Week will bring the blue island in the middle of the world of international sailing, the Yacht Club Capri continues to record excellent sports results.

From May 6 to 13 the waters of Capri are hosting a full program of sporting events from the final stage with the arrival of the Three Gulfs Regatta organized by the Circolo del Remo Della Vela and Italy. Pending the arrival of the great racers, now enrich the long prize list of the Yacht Club Capri were the cadets of the sailing school of the association island, chaired by Marino Lembo, who participated in the Trophy Optisud which ended with regatta Pescara.

A race that is not only valid for the Optisud trophy awarded the Optimist Trophy Kinder + Sport Italy and is part of the Challenge Trophy Marina di Pescara. The young caprese sailor Giancarlo Balsamo, who competed in the club’s insignia isolate, ranked sixth in the Trophy Optisud after three exciting stages that were raced in regattas of Crotone, Formia and finally Pescara entering of law in the top ten of the most coveted trophy from the mini sailors in this class. With this new result, step by step, the sailing school at the Yacht Club Capri, under the skilful guidance and experienced teachers, is preparing to train future champions that one day they can compete among the big under the colors of the sailing caprese circle.