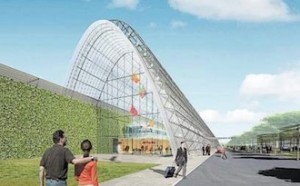 Well 2 from the Campania Region has been allocated million euro for the project of the high-speed train Sorrento and Amalfi Coasts from the total value of 20 million euro. The investment in the region will also affect 2018, with a further 3 million euro earmarked for the project, while the remaining amount will be deferred for years to come. The realization of the project was entrusted to the Italian-Belgian group Philippe Samyn & partners that, in 2009, won the competition.

Plans call for a large transparent tunnel that will be built on an area of 8,000 square meters and will extend in parallel to the high-speed line. The station of the Table will be linked to the regional subway through an interchange with two lines of the Circumvesuviana – Ottaviano-Sarno and Torre Annunziata-Sorrento – so as to allow the connection is from the Vesuvian towns and the railway line Napoli – Salerno.

The Vesuvio est of Striano station will become the 4th high-speed train from the Campania region, which will allow travelers and commuters to Amalfi, Positano and Sorrento, without necessarily having to go to Naples. Expectations are more than 10,000 daily passengers, so the project also involves the construction of a large parking lot for a thousand cars, taxi areas, bus terminals, shopping malls, restaurants and hotels.

The progress advances, but you are sure that in some cases is the best choice? The Gulf of Naples, Sorrento and the Amalfi Coast are places to enjoy to stay a moment breathless and grasp the immense beauty, with high speed is not there a danger of ruining the magic?