Feast of St. Antonino in Sorrento

Other than Valentine’s Day, February 14 in Sorrento is patronal feast 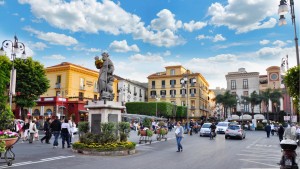 With all the respect to Valentine and lovers, but in Sorrento February 14 is the feast of the patron saint, St. Anthony Abbot, and for the occasion the whole town is celebrating. On this day falls the anniversary of the entrance to the eternal life of the saint, which took place in 625 and for Sorrento, especially older ones, it is an important event almost as Christmas.

This link between the city of Sorrento and its patron saint is renewed every year with the traditional procession of the statue on the streets of the city, accompanied by the Archbishop and escorted by the Civil and Military Authorities, from Archconfraternities of the city and representatives of the Order Malta and the Holy Sepulchre of Jerusalem. The statue is carried on the shoulders of those who could be called a sort of “knights of St. Anthony”. Not everyone is given such a role in fact, behind there is a long tradition of lineages. The carrier, now elderly, appointing the son or nephew who believes most worthy for this work, and so, what may appear in some ways a great effort, it becomes a huge privilege to be honored.

For the occasion, the city is filled with stalls and stands of all kinds, but the heart of the festivities is the Basilica of St. Anthony, where, already at the eve of the festival, from early in the morning, the prestigious silver statue of Patron saint is exposed on the high altar, ready to welcome the flow of worshipers visiting the Holy and the Crypt, for the anointing with blessed oil.

Only at the end of the religious festivities, with a solemn Mass at the back of the statue in the Basilica, and then only after renewing their devotion, the “Sorrentine Doc” is granted the festivities outside.

So, on February 14 in Sorrento we celebrate love, yes, but towards their Patron Saint, always alive in the heart of Sorrento, yesterday and today.