Everything about the Blue Grotto

Discovered in the world by two German tourists, today the Blue Grotto is one of the most sought after excursions of Capri 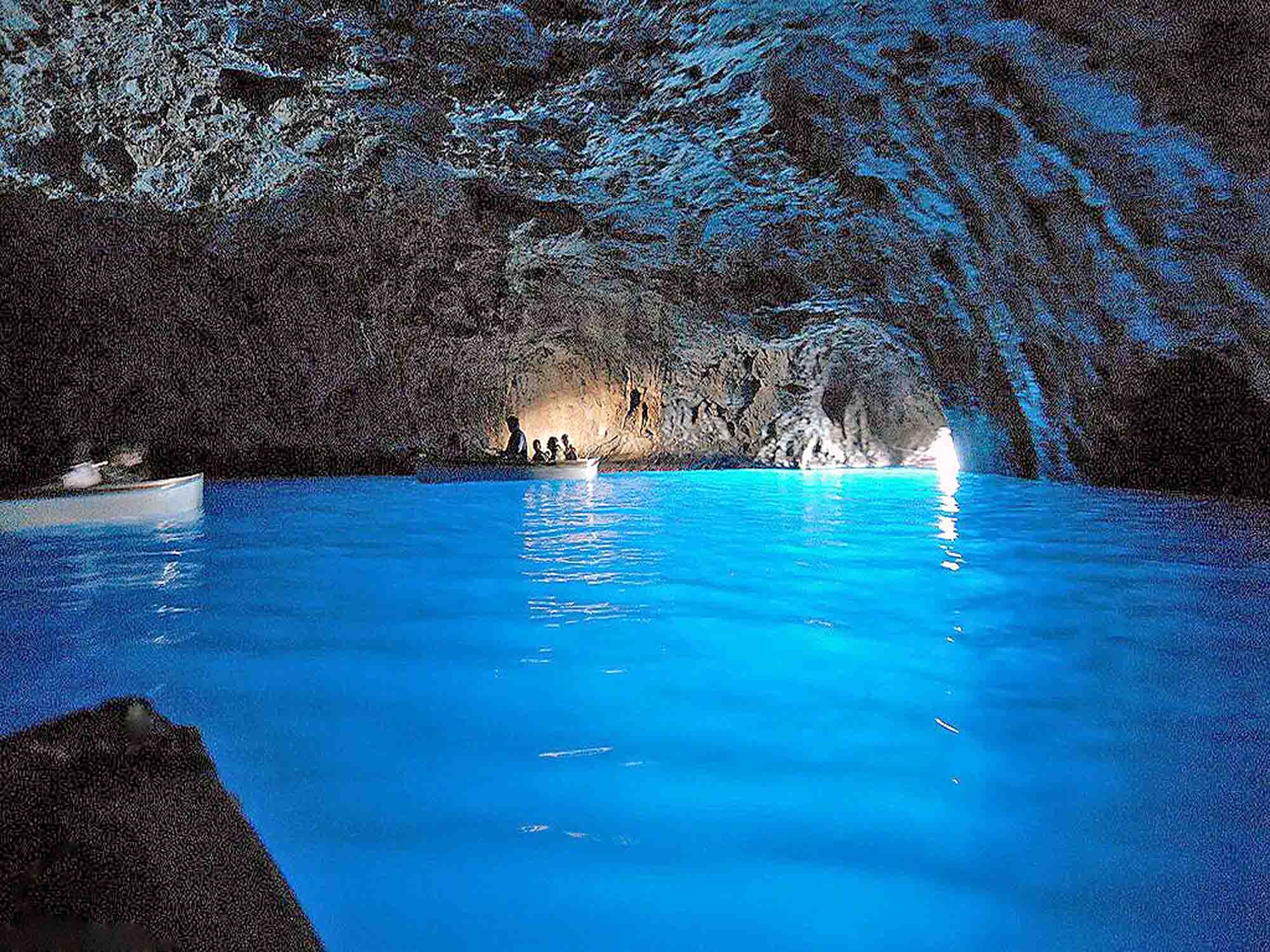 The writer Augusto Kopisch and the painter Ernesto Fries, two passionate German tourists on holiday in Capri, in 1826, revealed to the world the existence of a rocky cavity blowing on the crystalline sea with unparalleled charm that baptized with the name of the Blue Cave. Their holiday in Capri became the protagonist of their works so as to arouse the curiosity of travelers to make the excursion to the Blue Grotto an obligatory stop.

The blue color is due to the sunlight entering through a submarine window beneath the inlet passage filtered by crystalline water. The silvery reflections of the objects immersed instead, are due to the air bubbles adhering to the outer surface, giving a really great atmosphere.

Enchanted by the effect of the sun’s rays reflected in the cave’s waters, few visitors note that along the wall in front of the entrance hole, the Grotto extends into an elevated cavity that is accessed by a small, ‘Roman cement work. In fact, the Romans not only knew the Blue Grotto, but were supposed to have made them a place of worship devoted to marine gods. This hypothesis today still leaves much to dream of contemporary archaeologists, who argue that the cave’s backdrop carries seven statues of Roman times, in short, a true treasure!

The Blue Cave has something magical, only those who have visited it can understand it, inside it rather than floating seems to fly.

Here are some useful information to plan your tour in the Blue Grotto.

How do you get to the entrance to the Blue Grotto?

How much does it cost to visit the Blue Grotto?

The boat service costs € 10, while the entrance costs € 4 for a total cost of € 14 and pays (cash only) in a floating bargain.
The boatmen who visit the Grotto only usually ask for the tip. Of course this is at your discretion.
Reductions: Children under the age of 6 go free, for citizens of the European Union under the age of 18, the entrance is free, so they pay only 10 euros per person for the boat. For EU citizens between the ages of 18 and 25, a 50% reduction on the entry ticket is expected, so they will pay 12 euros.

Every first Sunday of every month you do not pay the entrance ticket, but only the boat service.

What is the best time to visit the Blue Grotto?

The time when reflections reach their maximum splendor, making the Cave truly amazing is between 12 and 14, however the difference compared to the morning is really minimal. The basic aspect to plan your visit to the Blue Grotto is the sun, in very cloudy days the reflexes are really mild and not worth it.
On the other hand, this time zone is also the most crowded than in the afternoon, but after 15, the sea tends to shake and the visit service could (I might stress) be suspended.

Can you swim in the Blue Cave?

This is the desire and the request of many, a dip in the Blue Cave, but unfortunately it is not possible by law, and it is also dangerous, in fact it would be enough for a high wave to end up against the rock. However, the toughest and most rebellious are often waiting in the evening after 5.30 pm when the boats go off to go swimming.

Can children visit the Grotto?

No limitation is envisaged, except that of common sense. Rowing on rowing boats can be complicated for children and infants under the age of 3 who also may not stand the probable wait in the sun.

How do you know if the Grotto is open or closed?

It is not possible to know in advance the opening of the Blue Grotto, because it depends on the sea conditions. As a rule, it is enough to check the sea’s forecasts, but it is confirmed by the boatmen who, every morning, around 8:30, reach the entrance of the cave, informing the various box offices. Sometimes tours within the Blue Cave can be suspended and resumed several times in the same day. To know the situation at the moment, you can call the Capri Motoscafist at 081 8375646 from 9:00 am to 3:00 pm.